Why attempt to publish a book dedicated to the-  » history of Neuroradiology in the world  » on the occasion of the XVII` Symposium Neuroradiologicum, the first of the new millenium?

In view of the extent of the task, it is a question one cannot help asking. To write « History » as it unfolds is, we all know it, a challenge both risky and impossible to accept: indeed, in such a case, it is never easy to grasp « reality », if it really exists, in a objective way.

And yet, Neuroradiology is undoubtedly at least one hundred years old… but while writing this sentence, I realize that I do not know the date of birth of our speciality… Experience shows that, during their maturation, human beings take a growing interest in their past, i.e. in their roots. To know one’s past represents a real need, sometimes related to what we call, in a more or less confused way, instinct. To under-stand the extraordinary developments that Neuroradiology will undergo in the coming decades, it is essential to know the multiplicity of ideas, the numerous exchanges which have been necessary and of course the people who have gradually built our Speciality.
How should we do to attain the objective initially set ? It was obvious ly impossible to find a unique author, or even a group of authors, capable of writing the History of Neuroradiology. It then became necessary to appeal to the whole of the inter-national Neuroradiological Community and to their good-will. But at once the problem of its identity appeared as a chief obstacle: Neuroradiology throughout the world is not only made up of its main scientific societies which official-N represent and structure it, but also by the anonymous Neuroradiology, unobtrusive, sometimes even oblivious of its own existence, practised by « non-labelled » colleagues.

Besides all these difficulties, there was still the prob-lem of the representativeness… Who was or could be considered as « officially commissioned » at the time of our appeal to write this History and what was to be done if the person commissioned was not interested ? How do you explain to some authors that History must not confine to their personal story even if they consider that their own contribution was very important ?

When the International Advisory Board accepted to launch out on this adventure, we all knew the task would be extremely difficult, almost impossible. But after thinking it over, it just appeared impossible not to give it a try… The next thing to do was to find the appropriate editorial team and, of course, the financial means. The editor in chief was an obvious choice : the hard-working: Professor Emmanuel CABANIS had already shown his talent in writing two books about European Neuroradiology, the latest published for the XXV’ anniversary of the European Society of Neuroradiology celebrated in Nancy in 1994 ; his wife Marie Therese IBA ZIZEN and his close associates being systematically and enthusiastically brought in on this kind of initiatives, there was no doubt about this choice. Shortly after Professor Danielle BALERIAUX, loyal and efficient, and the reliable Professor Ugo SALVOLINI joined in, and this international editorial team started appealing to anyone who was likely to make a contribution. The organization was based on the gather-ing of contributions from the various international and supranational com-munities of neuroradiology, and on an attempt for homogeneization with regard to criteria of relative impor-tance, sensitiveness, and finally of culture extremely difficult to manage.
The financing was also a major obstacle: to use the classic channels of edition would have required means out of proportion to the funds at the disposal of the Symposium. It is therefore thanks to their expertise, their energy and their incredible willingness that the editorial team managed to carry out this work. Marc DONCIEUX, General Manager of Europa Organization accepted to provide the financing as part of the general organization of the Symposium.
Thanks to Mrs PIGNOLET, computer engineer at the « CNO des XV XX », the team led by Professor CABANIS could use state-of-the art hardware. Hundreds of mails were exchanged and thousands of lines were written by the authors then forwarded to our loyal and devoted secretaries, Sylvette CASTEL-COLLOT – Marie-Claude GARBANI – Virginie SCHNEIDER. Doctor Adrian ISTOC agreed to share his great talent as computer specialist and his under-standing of page setting for hundreds of hours in order to turn the 300 monochrome pages initially planned into 600 quadrichrome pages, magnificently arranged. The huge amount of contributions we received forced us to go through an essential work of selection and reduction. We all know how tricky and difficult such a selection can be psychologi-cally.

As the work proceeded, numerous questions came up. In what order should the various national contributions be presented ? The alphabetical order appeared to be the most simple and natural one but in this case what international nomenclature should be used ? Some national entities have been created, some are not acknowledged everywhere, and others have finally disappeared… We hope readers will understand that there was no perfect solution and that when we had to make a choice, we considered that the solution we adopted was, on reflection, the best one or at least the most reasonable one.

Moreover the reader should be reminded that it is useless to try to establish any relation between the number of pages devoted to such or such country and its importance in a hypothetical world neuroradiological hierarchy. We did our best to include most countries, scientific societies and cultures. Despite our efforts, some are missing. We probably did not find the right way to approach them. We never intended to exclude anyone and regret we did not or could not involve more countries

Given the circumstances of publishing, on the occa-sion of the first Symposium of the XXI1 century, we thought that. the history of the Symposia represented the ideal track to follow be easy for some, in particular those who refused or failed to take an active part, to point out the shortcomings, mistakes, omissions, disparities of this document… It does not matter much. However, those who are interested in Neuroradiology, those who are fond of our speciality, those who experienced it, are experiencing it or will experience it, will be amazed at the quantity and quality of the information contained in this book. It is indeed a very beautiful work which, even if that was not its initial purpose, will undoubtedly be the reference book for the World Neuroradiology. Published on paper, it will weigh down the luggage of the-Paris Symposium par-ticipants on their return journey to their respective countries. The publishing on a CD would have been lighter anj-cheap-er but this would not have been compatible with the « fine book » we wanted to offer the world Community of Neuroradiology. The libraries of the future may not be com-puterized in full. A book like this one can be glanced through alone or with friends, at varying speed, which gives the read-ers the opportunity to take their time and draw their inspira-tion from others’ reflections and work to build themselves. More than a moment of relaxation, this document offers a true process of maturation.
Congratulations to Professor Emmanuel CABANIS and his team. All the people who took part in the creation of this document can take pride in it and they are allowed to dream. This book may only be the starting point to an edifice which will progressively grow richer and improve during the symposia to come.
Here is the result : this document exists, it will circulate all over the world. 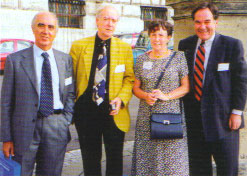